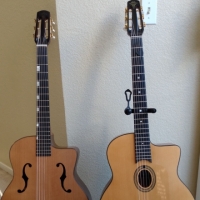 jonpowl Hercules, CA✭✭✭ Dupont MD-100, Altamira M01F
October 2013 edited October 2013 in Guitars, Strings, Picks, Amps, Pickups and Other Accessories Posts: 630
I have a chance to upgrade my Gitane DG-255 for the DG-340 Stephane Wrembel Model and am looking for feedback from anybody who knows or owns the DG-340. Any advice will be appreciated.
Thanks/merci/gracias
Share on FacebookShare on Twitter