A note from the Rino, Tcha, Dennis and Vilmos fan club!

Lango-Django Niagara-On-The-Lake, ONModerator
October 2015 edited October 2015 in Repertoire Posts: 1,647
Driving home from my Sunday night gig takes about an hour, so I listen to all kinds of CD's, most frequently Eddie Lang and Django, but occasionally just whatever floats to the top of the pile.

And last Sunday, what should turn up but Denis Chang's 2014 CD "Rino van Hooijdonk and Friends" with Tcha Limberger.

That being said, track #9 on the disc, "Reveries" exerted a magic so strong that I had to listen to it repeatedly.

Thanks to Dennis, you can see the lads recording "Reveries" live at this link: 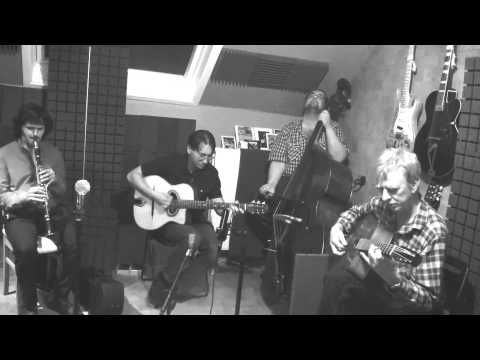 So much I could say about this cut and the whole CD, but I'll try to keep it brief.

1) Dennis, once again, congratulations on an amazingly successful project! Thank you! To me, this is the greatest new recording since Fapy's two CD's in the nineties.

2) Tcha Limberger is one hell of a clarinet player!

Now, that shouldn't be a big surprise to anyone who's heard Tcha play the guitar or violin, and yet.... the fact is, I can tell you after years of gigs with sax players who supposedly "double" on it---clarinet ain't an easy horn.

I remember the late great John McGann saying at a DiJ workshop that he bought one and found that he basically had to keep it in the case and throw in a little raw meat every now and then!

If you listen to Tcha play "Reveries" you'll realize that not only is he technically proficient with perfect 'legit' tone, but his backup work behind Rino's solo is a model of tastefulness.

So Tcha, if you ever should read this note, here's one of your fans calling for--- MORE CLARINET!!!!

3) Likewise, Rino's backing of Tcha's melody is impeccable, not to forget his wonderful solo!

I was particularly taken with one tasty little passage (see attachment) that sounds like something Django might have played... except I don't think Django could have managed this one using only two fingers!

It's not technically difficult, either... just keep that C note pinned down on your E string as you descend chromatically on your B string, starting at the 12th fret.

You know what I say when somebody comes up with a cool phrase like this that's not really difficult to play?

4) Two wonderful players like Rino and Tcha who really complement each other are rare in this world, and I would really, really, hope to see them playing together again at DiJ (please, music gods, let it happen!) or else make another CD together.

5) I don't want to short shrift Dennis and Vilmos, who did an excellent job, too!

6) "Reveries"-- what a beautiful tune! Written by Debussy, adapted by Django, great changes... what's not to like?

7) Both Tcha and Rino also seem to enjoy a lot of the older "American songbook" genre of swing/dixie tunes that I like ("Night and Day" and "Sleepy Time Down South" on this CD), and I hope my fellow gypsy jazzers will agree that these tunes make an excellent addition to the more standard GJ repertoire.

Reveries Rino lick.mp3 626K
Paul Cezanne: "I could paint for a thousand years without stopping and I would still feel as though I knew nothing."

Georges Braque: "In art there is only one thing that counts: the bit that can’t be explained."