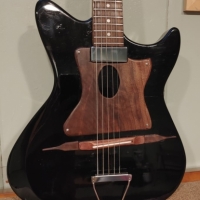 constantine New York✭✭✭✭ stringphonic
February 2019 in Guitars, Strings, Picks, Amps, Pickups and Other Accessories Posts: 428
Hello I just picked this guitar up and it has no label or identifying Mark such as the dimauro stamp. I've seen old guitars like this in the past. I'm sure it is not a patennote however I have no idea who the maker is. Maybe makers like Paul Beshher or Henry Miller ? Any help identifying this guitar would be highly appreciated. Thank you, Dean
s-l400.jpg 17.8K
s-l400 (2).jpg 18K
s-l400 (1).jpg 19K
Share on FacebookShare on Twitter