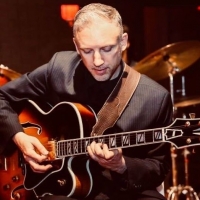 I couldn't fit the whole name in the title bar. I am listening to this album as I write to you via Shanghai! I just returned from San Francisco and I wanted to let folks know what a truly fantastic CD this is.

I cannot hold a flame to Monterey Jack's review of this disc on his site: (www.djangology.net) but I thought I'd do a short review to let folks know about it here too because this is a fantastic album that is worthy of exposure.

When I talked to Paul Mehling last year about this album as it was in the works he was telling me that the Hot Club wanted to do an album that was part swing, part classical album and partly a reflection of music that Django would have been exposed to and heard and influenced by during his life in Paris. This concept in addition to recording some of the more obscure Django pieces sounded really interesting at the time and I couldn't think of any other album that took on this idea.

You can find all the mentioned elements and more in the CD. Swing among the Hot Club's original compositions such as Mehling's up tempo opener Le Sourdoe and Even Price's swinging original Le Jongleur as well as Django's uptempo Vendredi 13 and Diminishing Blackness which also feature pianist Jeffrey Kahane. These guys are just burning on Vendredi 13!

On the more classical side you'll find a FANTASTIC arrangement of Django's Mass for the Romany people beautifully arranged by Evan Price for wind quintet performed by the Aeros Quintet. ALL fans of Django NED to hear this! This is actually a medley as the mass then goes into Django's Improvisation #1 done collectivelly by Mehling's guitar with the Aeros quintet. Brilliant!

Additional gems to the album showcase Mehling's banjo on Jelly Roll Morton's The Pearls, Evan Price playing saw on Mehling's Waltz for MC Escher. You'll find latin rhythms on Hot Club's rendition of Choro by Hector Villa Lobos as well as Django's Bolero (not troublant bolero - do your homework!) and the whold game jamming HARD on George Brassen's Les Copanins D'abord, being the only non period composition on the album.

All in all I highly recommend this album as it showcases some of Django's less often played compositions as well as fantastic originals and brilliant arrangements. The arrangement of the Mass?Improvisation #1 and Improvisation #3 alone make the album worth it in my opinion. Do yourself a favor and check this out because this is one of the few gypsy jazz albums I've heard in a LONG time that made me think, "wow this is really fresh and different". The recording quality is fabulous as well.

It's not on cdbaby yet but should be soon. In the meantime you can find more info at www.hcsf.com

Just a disclaimer also, though I'm from San Francisco, I don't play in the HCSF. I don't benefit personally by asking people to check this music out. I just really think this album is a fantastic piece of work and art should be shared so I encourage anybody to check this out!

Doug
www.dougmartinguitar.com Live life and play music like it's your last day on earth. One day you'll be right- Russel Malone
Share on FacebookShare on Twitter