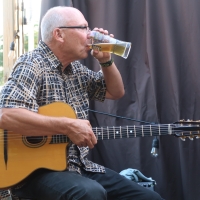 Keith Murch Ontario Canada and Naples Florida✭✭ Dupont MD50 and several archtops
August 2011 edited August 2011 in History Posts: 49
I was thrilled to find a great deal of information recently on http://www.paulvernonchester.com regarding Django's North American tour with Duke Ellington in 1946.

I live on the edge of Kitchener Ontario (Canada), which was one of the two Canadian cities in which Duke Ellington's orchestra performed during that tour. The Kitchener date was at the Auditorium Gardens on Queen Street East on November 5, 1946. The show (dance) went from 9:00 - 1:00 and tickets were $1.25. Kitchener is about 100 km from Toronto, which was where the second Canadian performance took place, the next day, before the band returned to the USA.

I found it very interesting to read the quote on Paul's website from a Toronto jazz enthusiast, George Foley, who said he saw Django perform with the Duke Ellington Orchestra at the old Mutual Street Arena in Toronto on November 6,1946. That is not consistent with what I have always understood, so I decided to do some more research. In 1966, my father wrote a letter to Patrick Scott, who was the City Editor of the Toronto newspaper, the Globe and Mail, to ask Mr. Scott if he saw Django when the band came to Toronto. Mr. Scott, who was at the same concert as Mr. Foley, wrote back to my father and said that he stood right next to Django and watched the Ellington Band play, but Django didn't perform due to "some union red tape". I have a copy of that letter. Until now, I never realized the other date was right here in my home town, so I have spent a few hours in the local libraries trying to find out more about both dates. I have found the advertisements for both of the Canadian concerts as well as reviews of both concerts in the old archives from two newspapers. Unfortunately, Django wasn't mentioned in either the ads or the reviews.

I have always assumed that Django didn't perform in Toronto, based on the letter my father gave me. Mr. Foley's account makes me wonder what really took place, but I have to think that Patrick Scott would have been correct, because he was a journalist and was very clear in his account of the events in his letter, which was written only 20 years after the concert. I wish I could find out more about Django's stop here in Kitchener, but I haven't been able to come up with any more than these ads and newspaper articles, which provided no information about Django. I will keep on searching.

If anyone has any additional information about Django's short visit to Canada, I would love to hear about it.