dennis.pol AthensNew
May 2019 in CD, DVD, and Concert Reviews Posts: 2
"NEW YORK CITY", April 1st 2019 - HOT CLUB RECORDS released the debut album
for jazz guitarist Dennis Pol called "New York City". With a retro swing manouche
vibe but also with a modern approach, the album has a unique and fresh style. The
album is consisted by nine tracks which two of them are original compositions of
Dennis, entitled "Motel One" and "Mr. Vasilis".
All the musicians live and perform regularly in New York City, however their origins
are from different parts of the world. Dennis Pol is half Italian and half Greek, Omer
Ashano(violinist) is from Israel, Alina Engibaryan (vocalist) is from Russia, Josh Kaye
is from England and Joe Bussey is from New York. Clearly, the band members are
all influenced by the tradition of jazz but each one has his unique musical 'accent'
and that's what makes this album so special.
The title of the album is taken by the first number of the record called "New York City"
which is composed by Django Reinhardt. 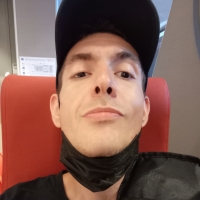