Over the last few days a friend of mine lent me his 1946 Selmer petite bouche. It's the most time I've had to really play the "real thing" and I had a few interesting observations about it:

1) Volume was good, but not a cannon. Most Favinos, Busatos, etc are louder. That's probably what they were trying to do by using a longer scale and greater neck angle. However, this Selmer had a pretty low action setup which might have attenuated the volume somewhat.

2) The midrange was a little more present then in a Favino or Busato. So it had a thicker tone for lead lines. But less explosive and bright then a Busato. Also less low end too....over all the Selmer had a sweeter, but somewhat tamer tone then a Busato/Favino. For lack of a better term, the midrange had a "farty" quality to it. We'll see if that term catches on!

3) One of the things that I really noticed was this sort of "vibro" effect that the Selmer had. It was especially noticeable when playing 4 note chords on the top strings. The sound would "beat" and swirl like some sort of effect had been added. Very cool and complex character. I always heard this on django's recordings and thought it was just his vibrato and/or wow and flutter of the recording. But it's actually the guitar! You can hear it on the intro to famous J'attendrai clip.

I also noticed that a dupont Vieille Reserve that I have here has that same vibro type effect...and also has the "farty" midrange. When you put the VR next to a real Selmer you really see how good of a copy it is. Sounds so similar...the only difference I can hear is the definition and character that comes with age. My guess is that Selmers probably sounded just like the VR when they were new. Kudos to Maurice dupont....I don't think anyone is making a Selmer copy that good!

4) By comparison, the Busato totally lacked the midrange and "vibro" type quality of the Selmer. Instead, it has a more cutting high end and deeper low end. But not much mids. One of it's strongest characteristics is the sign wave like quality to the notes. Unlike the complex character of the Selmer, the Busato gives a very pure tone with a very, very strong fundamental. The overtones that are there sound very even. I think Bob Holo has actually confirmed this with a spectral analysis. By comparison, the Selmer sounded like it has a lot more odd harmonics and "breakup." Bob actually remarked once that Busatos are like tuning forks!

I can't say one is better then the other...just different. One thing is for sure though, the Busato will spank the Selmer in a campfire jam. The bright, clean, fundamental rich tone it has will cut through anything.

Anyway, just thought I'd share that. Not too often I get guitars of that caliber side by side. 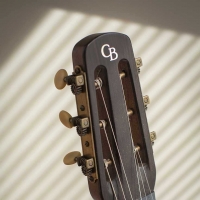